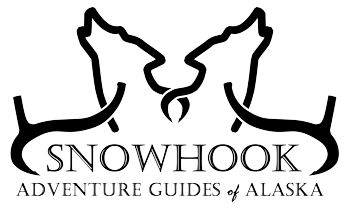 Best-Damn-Handling-Wife, Rebecca made a simple promise to AJ when he told her he wanted to run Iditarod: “I will do everything in my power to get you to the starting line, you have to get the team to the finish line.”

Since making that promise, AJ has completed six Iditarod races, won two mid-distance races, has six top five finishes in other mid-distance races (and one sprint race), and received two Humanitarian Awards for giving exceptional dog care on the trail. As the care of our dogs is at the core of Snowhook, the Humanitarian Awards are a bigger honor than any first place finish.  AJ also has three nominations for Iditarod’s Sportsmanship award to his credit.

Snowhook is committed to providing quality care to our dogs whether they be our race dogs, retired dogs, young dogs, old dogs, dogs who don’t think they’re dogs or rescued dogs.

Thank You To Our Sponsors

Some dreams are not cheap.  The Iditarod and racing in general is just such a dream.  With dog care, dog food, race entrance fees, equipment, shipping, and transportation, Snowhook’s expenses were approximately $25,000 per race season.

We gave and give our dream our all—all our effort, all our resources—yet a gap remained.  But, make no mistake, Team Snowhook is more than the dogs on the line or the musher on the runners.
​
Today, we give the same energy and focus we did to racing to sharing our Alaska adventures with guests of Snowhook Adventure Guides of Alaska (SAGA).  Although we are no longer actively racing, we wish to thank Team Snowhook.  Thank you to our corporate or individual sponsors—you made our starting lines, finish lines and all those miles in between possible.

Our dog dish runneth over,
AJ & Rebecca Savidis and the Snowhook Kennel Team